Theology and the Actually Infinite 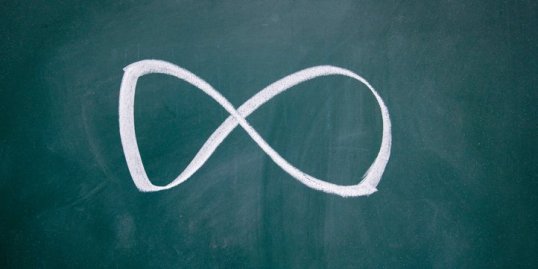 One of the common claims which is utilized in arguments for the existence of God is that actual infinities cannot exist, implying that there cannot be an infinite regress of causal events in the history of the universe. If there cannot be such an infinite regress, then there must be some First Cause. Theologians then put forth other arguments attempting to show that this First Cause must be God. Blake Giunta, a Christian apologist, has constructed a very interesting and quite useful website cataloging common lines of argumentation from both sides of the debate (color coded Green for Christian arguments and Red for opposing arguments), along with citations and documentation for those claims, called BeliefMap.org. It does not take very long for a fairly cursory perusal of Belief Map to bring one to this exact claim regarding the actually infinite.

While I disagree with Mr. Giunta on many of his views, I have a great deal of respect for him and I think that his work with Belief Map is absolutely fantastic. He truly does attempt to give an irenic and charitable view to the positions of his opposition, and he does sincerely want to discuss the actual arguments being made, instead of being content to knock down Straw Men. To that end, I would like to help Mr. Giunta add to his encyclopedia of apologetics by addressing the manner in which one might answer the claims about actual infinities.

Under the heading, “Logically, prior events can’t number to infinity,” Belief Map separates the discussion into two further, green claims. The first of these is, “Infinity can’t exist in the real world,” which is further subdivided into three green categories and four red. Two of the reds are theological in basis, and not of much concern to me, but the other two are mathematical and interesting. Each of these red categories contains a minor rejoinder, so I’ll be addressing them as best I can, as well. The second claim under the “Logically, prior events can’t number to infinity” heading is that “Infinity can’t be formed by adding.” After discussing all of the “can’t exist” categories, I will then consider this one.

The problem with this argument is that it is not even cogent. Infinity is not a number. There are, classically, two ways in which “infinity” is discussed as a concept in the philosophy of mathematics (Katz, 45-50). The first is the “potential infinity,” which is the idea that an iterative process can be repeated without any apparent bound. In this case, “infinity” is a description of the manner in which a process is carried out, and certainly not a number. The second way in which the concept is discussed is the case of “actual infinity,” which is the idea that a completed set can contain a number of elements which is greater than any Natural number. In this case, “infinity” is not a number, but rather a quality of numbers– a number can be either “finite” or “infinite.” And just as there are a multitude of finite numbers, some of which are greater than others, there are similarly a multitude of infinite numbers, some of which are greater than others (Katz 795; Conway; Robinson).

Numerical operations can only be performed upon numbers. For this reason, the expression “Infinity – Infinity” is entirely incoherent. It is no mathematically different than saying “Red – Red” or “Delicious – Delicious” or “Blake Giunta – Blake Giunta.” These are not mathematical statements, and as such, we cannot draw mathematical conclusions from them.

Belief Map offers three cases as examples of metaphysically impossible scenarios: an infinite tug of war, an infinite hotel, and an infinite popsicle.

The infinite tug of war is actually just a restatement of the question of subtracting one infinite number from another, which we’ve already discussed. It makes precisely the same mistake as before, treating “infinity” as a number and not recognizing that there are numerous infinite numbers, not all of which are equal. As such, it is therefore easily resolved by proper mathematics.

The infinite hotel illustrates a counter-intuitive property of actual infinities, but it does not illustrate a metaphysical impossibility or a contradiction. The only way one might legitimately claim that this is an absurdity would be to already reject the possibility of actual infinites. However, since this is being utilized as an argument in support of just such a rejection, to do so would simply be fallaciously circular question begging.

The infinite popsicle does present something of an absurdity. I’ll agree that Bernardete’s scenario is metaphysically impossible, but not for the reason which he suggests. Popsicles are composed of atoms. Atoms have a significantly non-infinitesimal volume. As such, one cannot create a popsicle with an infinite number of layers in 4 cubic inches (or any other finite volume) of space. This thought experiment doesn’t work, but not due to any metaphysical absurdity relating to infinity.

This bald assertion is an unfortunate bit of question begging. One of the primary definitions of an actually infinite set is a set which contains a proper subset of equal cardinality (Katz 792-795). Belief Map offers no good reason to accept the claim that proper parts always contain less than wholes. One might as well argue that actual infinities can’t exist because actual infinities can’t exist.

Belief Map cites this as an objection to the claim that actual infinities cannot exist, and it is absolutely correct to do so. For more than 100 years, mathematicians have been developing and utilizing a valid and consistent framework for math which deals perfectly well with actual infinities.

However, Belief Map offers a rejoinder to this: “But so what? A concept’s being logically possible (free of formal contradictions) doesn’t entail that it is actually/metaphysically possible.” Certainly, I agree– though, I must say, I find a little bit of irony in this position being raised here, since I quite often see the exact same sentiment brought up by atheists in regards to God’s possibility.

That said, at best this argument is merely inconclusive. It does not say that actual infinities aren’t metaphysically possible, but only that they might not be. In 1925, David Hilbert addressed this precise line of argumentation:

Also old objections which we supposed long abandoned still reappear in different forms. For example, the following recently appeared: Although it may be possible to introduce a concept without risk, i.e., without getting contradictions, and even though one can prove that its introduction causes no contradictions to arise, still the introduction of the concept is not thereby justified. Is not this exactly the same objection which was once brought against complex-imaginary numbers when it was said: “True, their use doesn’t lead to contradictions. Nevertheless their introduction is unwarranted, for imaginary magnitudes do not exist”? If, apart from proving consistency, the question of the justification of a measure is to have any meaning, it can consist only in ascertaining whether the measure is accompanied by commensurate success. Such success is in fact essential, for in mathematics as elsewhere success is the supreme court to whose decisions everyone submits. (Hilbert)

The mathematics of the infinite has been successful– inordinately successful, in fact. It forms the basis upon which mathematics has been securely founded. Given that the previous arguments on Belief Map aren’t very convincing– or even coherent, in cases– I see no reason to think that actual infinities are not metaphysically possible.

This is another good objection to the impossibility of actual infinities. If we are discussing an interval with cardinality of at least

. They exist equally as much as the parent interval does and are not simply potentialities waiting around to be actualized.

Now, perhaps Mr. Giunta might respond that he has already granted that such mathematical intervals may reasonably be consistent, but that he is arguing against physical intervals, and that these are only potentially infinitely divisible. However, this seems to be yet another bit of question begging, and is only a reasonable assumption if one already denies the metaphysical possibility of actual infinities. After all, if (for the sake of thought experiment) we adopt the assumption that actual infinities are metaphysically possible, then all of the infinite subintervals of a given, physical interval would be coextant with that interval.

Infinity can’t be formed by adding

From time immemorial, the infinite has stirred men’s emotions more than any other question. Hardly any other idea has stimulated the mind so fruitfully. Yet, no other concept needs clarification more than it does. (Hilbert)

Belief Map, unfortunately, has some ill-formed views regarding the nature and mathematics of infinity. This is owed, at least in part, to the fact that Mr. Giunta borrows heavily from William Lane Craig’s work in the discussion of this subject. However, as I have discussed before, William Lane Craig has a gross misunderstanding of the concept of infinity (Part 1 and Part 2). Hopefully, the information which I have presented here can help Mr. Giunta to improve his wonderful work and correct some of the misconceptions which Belief Map’s arguments present in regards to the actually infinite.

Katz, Victor J. A History of Mathematics: An Introduction. Pearson, 2018.

4 thoughts on “Theology and the Actually Infinite”