There is an inherent danger attached to blindly accepting the word of someone who sounds like they are presenting a rational, scientific claim. Too many people are willing to accept a proposition solely because they’ve heard it from someone who bears the appearance of intelligence. The line of thought seems to be, “Well, he’s smarter than me, so he must be right!” Unfortunately, this sort of fallacious reasoning goes largely unchecked, and often becomes formative in the common understanding of entire groups of people.

For almost the entirety of your mathematical education, you have been taught that the ratio of a circle’s circumference to its diameter, which we affectionately refer to as π, is something close to

Let’s take a look at how we can break this down. If we want to know the exact value of π, we need to know two things about a circle: we need to know its diameter, and we need to know its circumference. By far, the easier of these to ascertain, when performing compass-and-straightedge geometry, is the diameter. Given a starting point, we can (theoretically) construct a circle with any arbitrary diameter that we would like. Therefore, let us simplify our discussion as much as possible by taking as our model the simplest possible circle: a circle with a radius of 1. Given that the radius is 1, we know that the diameter is 2. So, now all we need to do is to figure out the circumference of the circle, and we can calculate the exact value of π.

Now, let’s consider another figure: a regular hexagon. This six-sided polygon has been very thoroughly explored by geometry, and its properties are much simpler to derive from very little knowledge than those of the circle. However, just like the circle, a hexagon is a closed plane figure which is symmetrical about a central point. In fact, it is possible for us to consider a hexagon and a circle which both share a centerpoint such that the apothem of the hexagon is equal to the radius of the circle. The apothem, if you did not know, is the distance from the center of the hexagon to the midpoint of one of its sides. Perhaps the perimeter of such a hexagon might give us some approximation of the circumference of the circle. Take a look at Figure 1, below. 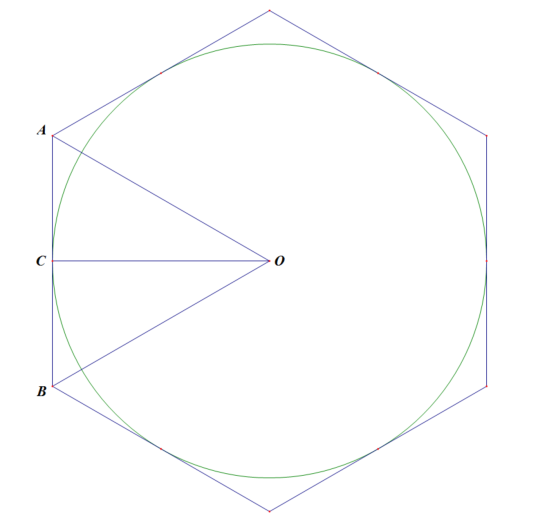 Figure 1: A circle and hexagon with radius equal to apothem

In this diagram, the point O is the center of both the circle and the hexagon, while

is the radius of the circle and the apothem of the hexagon. One interesting thing to note, here– which will be useful later in our discussion– is that

Figure 2: Circle and Dodecahedron with radius equal to apothem

In Figure 2, we’ve constructed a regular dodecagon (12-sided polygon) whose apothem is equal to the circle’s radius, centered on point O. As you can see, its perimeter is much closer to the circumference of the circle than was the hexagon’s. Still, it is immediately apparent that the perimeter of the dodecagon must be greater than the circumference of the circle due to the clearly visible distance of the vertices from the circle. If we again double the number of sides, drawing an icosakaitetragon (24-gon), we’ll notice that the vertices come even closer to the circle. Archimedes performed his famous calculations on the circle using nonacontakaihexagons (96-gons), which would look like Figure 3, below.

Figure 3: Circle and Nonacontakaihexagon with equal radius and apothem

At this point, it becomes virtually impossible to distinguish the nonacontakaihexagon from the circle, with the naked eye. However, if we were to zoom in, incredibly close on this image, we would find that the vertices still don’t quite touch the circle. The important thing to notice is that with each doubling of the number of sides, those vertices approach closer and closer to the circle. Now, Archimedes was incredibly advanced, for his time, and while he dabbled in some concepts which would later become fundamental to Calculus, he did not have that bit of math as a fully developed tool with which to perform his work. We do have this too, though, and we can utilize it, here.

Figure 4: Calculating the perimeter of an Infinigon

In Figure 4, I’ve zoomed in on a diagram which will aid in our calculation. In this diagram, O is the center of the circle. The segment

is the radius of our circle, and will also be the apothem of our infinigon.  The segment

is half of the side of a hexagon with apothem

. Now, if you remember way back when we were discussing Figure 1, I mentioned that it was important to note that the triangle formed by a regular hexagon’s center and the endpoints of one side of that hexagon is an equilateral triangle. Since our diagram in Figure 4 is only dealing with half of a side, we know that

is half of an equilateral triangle, and from that information– since the radius of the circle has a length of 1– we can determine that

has a length of

, but it is also one half of the side of a regular dodecagon with apothem

and half of one side of an icosakaitetragon; while

and half of one side of a tetracontakaioctagon.

This yields a general pattern: one side of the n-th doubling of the number of sides of a polygon, starting from a regular hexagon, will yield a value exactly

, we can multiply these numbers together to yield the perimeter of the polygon. Taking the limit of this formula as n goes to infinity gives us

. Therefore, the circumference of the circle is 4√3.

Since π is the ratio of the circumference to the diameter, and since we now know both of those values, it is very simple to calculate

What can be concluded from this?

The main lesson I’m attempting to demonstrate in this post is that a person can quite easily make an intelligent sounding argument for a claim which is, in actuality, entirely preposterous. No, I have not actually proved that every mathematician since Archimedes’ time has been grossly underestimating the value of π. However, I have presented an entirely false claim with just enough mathematical disguise as to make it seem plausible to someone who might not be well informed on the subject. I utilized the tools and language of mathematics, but I utilized them improperly in order to demonstrate my conclusion.

Why would I go through all of this trouble? Because this morning, I stumbled across this post on the Wintery Knight blog. The author of the blog contends that, because William Lane Craig published an article on the Kalam Cosmological Argument in a peer-reviewed astrophysics journal, it has now been shown conclusively that atheism is incompatible with science! Of course, the author neglects to mention that the article in question was published 15 years ago in an extremely obscure journal which explicitly states that it includes “topically selected special issues” from non-scientific fields. William Lane Craig is not a scientist, nor is he even a philosopher of science. He is a philosopher of religion and a theologian who dresses his arguments in just enough pseudoscience to make them appear conclusive to the ignorant. William Lane Craig might as well have published an article in that journal proving that π=2√3.