Egyptian Math for the Common Core

A short while back, one of my friends posted a series of videos on Facebook complaining about the Common Core standards which are being rolled out in the United States. Unsurprisingly, not a single one of the videos actually addresses the standards laid out by the Common Core– despite their being freely available on the Internet— and instead the videos display knee-jerk reactions to specific teaching methodologies which are not understood by the complainants. Generally, these sorts of arguments against the Common Core focus on the methods of early, basic arithmetic taught in the 3rd and 4th grades. At this stage, the Core requires that students become familiar with the nature of a base-10 counting system, such as the one we utilize. The Indian-Arabic number system which we have adopted for mathematics has the benefit of simplifying these base-10 properties, but unfortunately that comes at the cost of obfuscation.

Teaching the base-10 system as it ought to be initially taught– without the shortcuts inherent in Indian-Arabic numerals– is a very alien procedure to most people. Because it is new and strange and takes more steps to accomplish than the familiar method of arithmetic, parents are frightened and confused; and when parents are frightened and confused, they tend to lash out rather than taking the time to actually learn the purpose and reasoning behind the methodology.

It occurs to me that a possible solution might be found in Egyptian arithmetic.

To fully illustrate what I mean, let’s take a look at this first video which my friend posted:

The math problem under discussion in the video is 1568+1423+680. The little girl’s teacher, in an attempt to explain the nature of the base-10 system of counting, had taught the class to represent the powers of 10 with geometric objects: points for the 1’s place, lines for the 10’s place, squares for the 100’s place, and cubes for the 1000’s place. The girl’s parents, not understanding the intention behind the lesson, are understandably confused by this obfuscation. Such a system seems wildly alien and convoluted, especially given the fact that these geometric symbols are never used in this manner elsewhere in mathematics.

Imagine, instead, that the teacher had told the class, “Today, we are going to combine Math and History in order to learn how the ancient Egyptians did arithmetic!” The teacher might then inform the children that the symbols we use, today, for numbers did not always exist, and that the Egyptians used a different method for counting.

The hieroglyphs, in ascending order, represent a stalk of grain, a cattle hobble, a coiled rope, and a lotus flower. You’ll notice that there’s no symbol for 2 or 3 or 4, et cetera. When the Egyptians wanted to write such numbers, they would simply repeat one of their other symbols. So, for example, when an Egyptian wrote the number 4, he would write four strokes, ||||. If he wanted to write the number 34, he would write ∩∩∩||||, and so on. Thus, the numbers from the video would be written as follows:

Can you guess how the Egyptians would then add? Well, it’s fairly simple. Start by counting up all of the |’s. When you have counted up ten |’s, discard them and add another ∩ to the picture. Do the same for the rest of the symbols, each time replacing ten of the symbol you are counting with one of the next greater symbol. Figure 3 shows my working through this process for the particular math problem from the video. Using red, I slash-off ten counts of a like symbol and replace them with one of the greater symbol. I then count up all the remaining symbols for my solution, given in green.

Using the usual “stacking” method of arithmetic which you learned in school, or a calculator, or even just adding up in your head, you will find that we came to the proper answer using this method: 3,671. In fact, we performed the exact same process as the “stacking” method utilizes, but without the shortcuts that Indian-Arabic numerals provide to us. The whole purpose behind this sort of lesson is to illustrate why those shortcuts work. This helps children to develop a better sense for numbers, when they are young, thereby making mathematics less about memorizing things and more about understanding how things work. This, in turn, will help the children later on when they begin to learn more complicated mathematical processes which cannot simply be memorized, like Algebra, Geometry, and Calculus.

At the same time, kids get to have a fun history lesson. Ancient Egypt is always an interesting subject for grade schoolers, and allowing kids to draw pictures instead of simply sitting down and memorizing arithmetic will help to show them that mathematics can be fun, while teaching them how the Egyptians calculated a worker’s wages, or the number of bricks necessary to build the pyramids, or the amount of crocodiles in the Nile.

But what about some of the other criticisms that Common Core lesson plans have received? Could Egyptian math help us to understand those lessons better, as well? I think that it most certainly could. While the addition problem, above, has seen some blowback from Common Core critics, it is far more likely that you’ve heard complaints about subtraction problems, such as you can see in the following video (which my friend had also shared):

Here, the man on the microphone presents people with a seemingly simple math problem, and shows the “Common Core way” of performing the calculation. Of course, the gentleman never mentions that this method is actually not required by the Common Core, nor that the lessons on base-10 arithmetic required by the Common Core are not intended to replace Indian-Arabic arithmetic, entirely; however, pointing out the dishonesty of such Common Core critics is not my main point. Let’s see how Egyptian mathematics could help our children to solve the problem of 32-12! 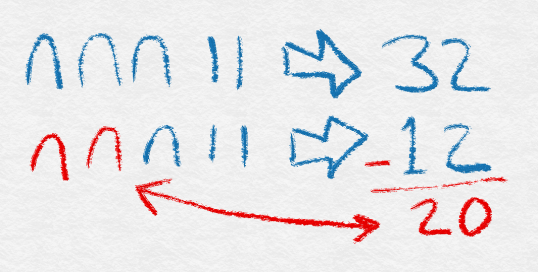 The original numbers from our problem are in blue. When you place 32 next to 12, in this way, it is quite easy to visually notice precisely what is missing. And that’s what this lesson is really about: subtraction problems ask a student, “What is missing from the smaller number in order to make the bigger number?” In fact, from a purely visual point of view, the Egyptian method of subtraction is even easier than the Indian-Arabic method! Of course, this is an incredibly simple math problem. What happens when we try subtracting bigger numbers?

In Figure 5, we see an example which requires that oh-so-lovely task of borrowing for subtraction. For both the Egyptian method and the Indian-Arabic method, the blue symbols represent the two numbers in our initial problem, the red markings indicate the borrowing process, and the green numbers are the answer to the problem. For the Egyptian method, I started with the 1’s. Noticing that the smaller number actually had more 1’s, I realized that I needed to borrow. I scratched out a 10 and added ten 1’s in red. Then I drew green 1’s with the bottom number until it had just as many 1’s as the top. Moving on to the 10’s, there is no need to borrow; however, since we scratched out a 10, earlier, I now ignore that symbol when drawing my green 10’s to match the top. The 100’s require borrowing, again, so I scratch out one of the 1000’s up top, add in ten red 100’s, and then draw all the green 100’s which are needed to make the bottom match the top. Finally, for the 1000’s, I see that my bottom already matches the top, since I borrowed, so I do not need to draw any new green symbols. Counting up all my green symbols, we see that we have 7 hundreds, 3 tens, and 5 ones, for an answer of 735.

Once again, the Egyptian method uses the exact same mathematical process that we do by shortcut using Indian-Arabic numerals, but it gives children a better visual picture of why the shortcut works, and exactly what it is that we are doing when we “borrow” from the tens column. Furthermore, the Indian-Arabic method requires a lot of memorization. Just in the problem above, for example, children would have needed to memorize that 13-8=5 and 14-7=7 before they could even do this problem. Though it takes a little bit longer, no such memorization is required by the Egyptian method, because we are not taking any shortcuts in our counting. When kids understand how math works, they will have less need for the tedious, boring hours of memorization which cause students to start hating mathematics.

I think that these early 3rd and 4th grade math lessons which are the subject of endless complaint from opponents of the Common Core could be wonderfully illustrated using Egyptian arithmetic. The children would have a lot of fun, they would get a chance to learn about history, and they would be learning the mathematical skills which they’ll need to get a real understanding of arithmetic. Egyptian numerals provide perfect examples of a base-10 system of counting without the perplexities involved in the more-familiar Roman numerals, and without the alien abstractness found in using other, random symbols for counting (as in the first video). Even the parents who do not understand why the Common Core wants to teach base-10 counting would likely be satisfied with an Egyptian lesson for its historical value. Incorporating Egyptian math into a lesson plan is truly a win for the teachers, a win for the parents, and– most importantly– a win for the students.

P.S.- If any of my readers are interested in learning even more about Egyptian mathematics, including their methods for multiplication, division, and fractions, you will find no better source than David Reimer’s recently published Count Like an Egyptian: A Hands-On Introduction to Ancient Mathematics. You can find it at Amazon, here:

2 thoughts on “Egyptian Math for the Common Core”