Be smart. Use tau.

For anyone who didn’t know, this past Saturday was Tau Day, a celebration of the proper circle constant!

A couple weeks ago, I told all of you about how π is stupid, and urged everyone to be smart and use τ, instead. However, you might be surprised to learn that this is not the end of the debate, when it comes to angles. While I argue that people should measure angles in terms of τ, many traditionalists argue that they should be measured in terms of π, our grammar schools are still intent on teaching the incredibly archaic degrees of arc, and if you’ve ever fiddled with a scientific calculator, you might have learned that some backwards people prefer gradians. But that’s still not the end of the debate. According to a video by Dr. David Butler of the University of Adelaide, “π may be wrong, but so is τ!”

I’m going to celebrate Tau Day, belatedly, by rebutting Dr. Butler’s presentation. I’m going to show that degrees, gradians, η, and π are all stupid, and that the only smart choice in this debate is τ.

After watching Dr. Butler’s video, you may notice something curious– especially if you have done any reading on the Tau debate. Usually, when people want to support a unit for measuring angles, they give a mathematical definition for that unit. For example, the traditional unit for radians is given as

; or, in plain English, “pi is defined as the ratio of a circle’s circumference to its diameter.” Similarly, supporters of τ generally begin to explain the whole debate by writing

, “tau is defined as the ratio of a circle’s circumference to its radius.” However, notice that Dr. Butler never provides such a basal definition for η in his whole video. The closest he gets is when he presents the equation

, but an equation is not a definition. For example, if someone asked me, “What do you mean by ‘tau?'” and I replied to them, “Tau is

,” I would not be providing a very helpful answer. So, then, we must ask: why doesn’t Dr. Butler give a definition for η?

To get to the answer, let’s look at a couple of images. In Figure 1, below, I show you everything you need to be able to construct the mathematical definition of both τ and π. As you can see, both are fairly simple. In order to construct a definition for τ, you must first draw a straight line as your radius, then draw a circle so that one endpoint of your radius is the center while the other endpoint lies on the circle. That’s about as minimalist as it gets. In order to construct the defining properties of π, you have to do the same thing you did for τ, while also drawing another radius in precisely the opposite direction of the first, in order to define the diameter. It’s an extraneous step, and the reason that I think π is stupid, but it’s neither difficult nor counter-intuitive. 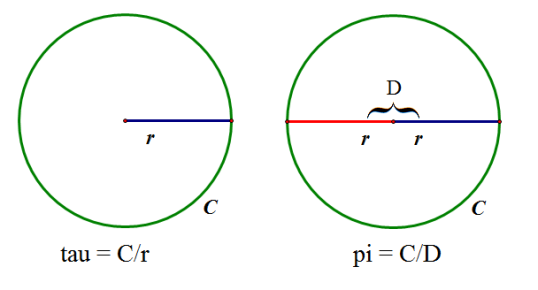 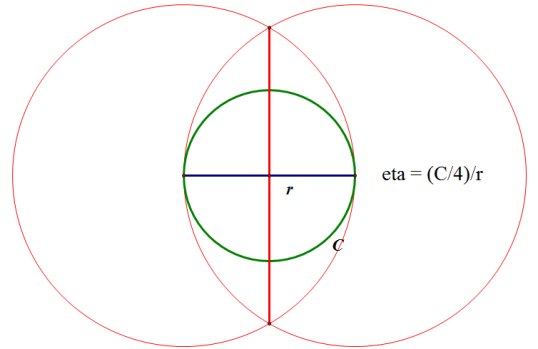 Of these three measures– η, π, and τ– it is fairly clear which one is the simplest and most natural to measuring angles. No matter which unit one decides to use, there is always a factor of

in its definition. When we look at π, we see that

. The degree of arc which we inherited from the Babylonians is formalized as

, while the gradians were invented in France as

. As we have already seen, η must be similarly defined:

. However, when we look at τ we see that

, which means that the definitions of all these other units are already being defined as subdivisions of τ. Let’s just be smart and cut out the extraneous factors! 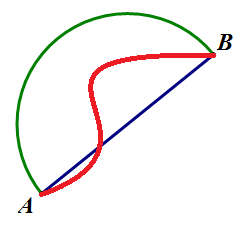 After neglecting to actually define η, Dr. Butler begins talking about paths between two points. As we all learned in grade school, the shortest path between two points in a plane is a straight line. Butler draws a curvy path between A and B and posits that we would like to know how much longer that path is than the straight path. However, without answering this question, he continues, “Of course, the curve we really want to know about is the circle.” But why is the curve that we “really want to know about” the circle? Butler doesn’t answer this. The reason, of course, is that η is a unit of angular measurement, and angles are subdivisions of a circle’s full arc. The choice of a semicircular path over any other curve, in this example, is completely arbitrary. Butler chose a path which coincided with his desired unit of measure.  I could just as arbitrarily construct a curvy path with τ or π or

proportions to the straight line. 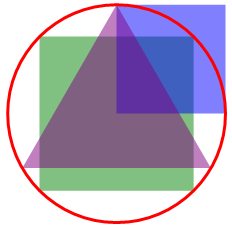 Next, we take a look at the area of a circle compared to the area of an inscribed square. Butler lauds the fact that this proportion is η! However, he has again made an arbitrary choice specifically to highlight his preferred unit. I could just as easily construct the blue square on the radius from Figure 4 to show that

. Or, I could inscribe a regular triangle to show that

as I have previously shown.

After that, Butler endeavors to show that a right angle is more fundamental than a full turn. This hearkens back to our initial discussion of definitions. What is an angle, let alone a right angle? How are these things defined? Let’s forget circles, entirely, for a moment. Let’s say that an angle is the inclination between two straight lines which meet in a plane. When one line stands on another line such that the angles to either side of the standing line are equal to one another, we call these right angles. Lovely! Now, how can we tell whether these two angles actually are equal? I’ll give you a hint: it requires circles (see Figure 5). 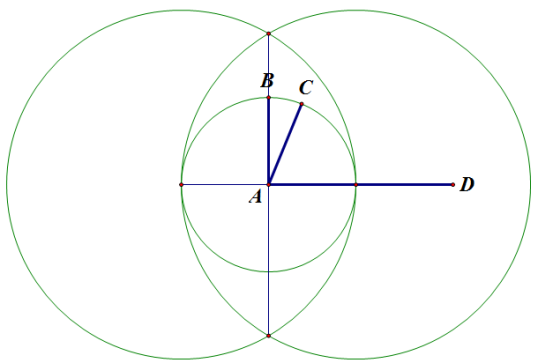 Figure 5: Why is angle BAD right, but angle CAD is not?

, which is “much prettier” than if we utilized

instead of η. He would have a very excellent point, here, except for the fact that his definitions of the Sine and Cosine functions are horribly inadequate. While it is true that these functions are usually introduced to students with the use of right triangles, their actual definition comes from circles. After all, if we could only evaluate trig functions by the usage of triangles, then these functions would be undefined for the angle η, since it is impossible to construct a triangle containing two right angles (at least, in Euclidean geometry). They would also be undefined for any angle greater than η, as well as for the angle zero. For several hundred years, now, mathematicians have preferred to define the trigonometric functions by the unit circle (see Figure 6). 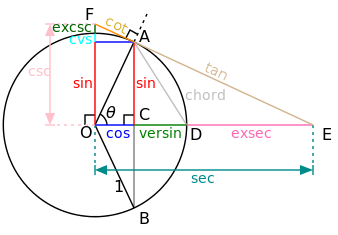 Dr. Butler acknowledges this problem with triangle-defined trig functions, but attempts to gloss over it in an inadequate manner. Take a look at Figure 7, for a moment. Butler pretends that the trig functions given parameter

produce identical results as if given

. This is absolutely incorrect. While it is true that

, this equality is not necessarily shared by all of the other trig functions. For a quick example, 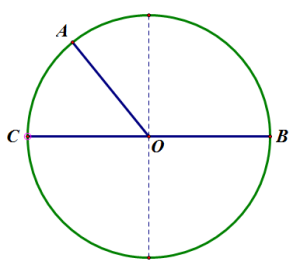 Finally, we’ll move on to the argument that Dr. Butler seems to consider his coup de grâce. In discussing how to approximate η, Butler tells us about “the Needle Experiment.” Let’s say you have a needle, and a series of parallel lines separated by exactly the length of the needle. You throw throw the needle at the lines, randomly, and take note of how it lands– sometimes it is touching one of the lines, sometimes it is not. I’ve provided a screen-capture of his diagram of this experiment as Figure 9. Butler notes that the probability that the needle will be touching a line is 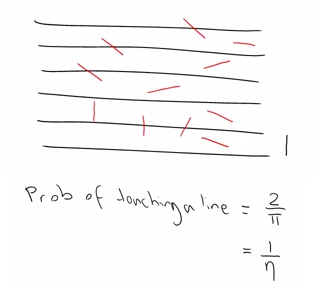 Is Dr. Butler seriously trying to hold that this is the best method for showing an approximation of the numerical value of the fundamental angle constant? He hasn’t even provided one, here! He simply made a quick assertion about the probability of an abstract situation. If a student asked me, “Why is

?” would it be at all helpful for me to reply that the Needle Experiment yields a probability of

? Seriously, of all the arguments presented in this video, this one is the most atrocious. I’ll issue Dr. Butler a challenge. Each of us gets a high school geometry student and fifteen minutes of time. I’ll show the student how to approximate τ using the Archimedean method, while Dr. Butler uses the Needle Experiment to show how to approximate η. Whichever of us ends up with a student who better understands why the approximation works is the winner.

Measuring angles should not be a complex task. Teachers should be instructing students in how to comprehend mathematics, not in how to memorize the subject. To that end, using degrees of arc, gradians, π, and η are all stupid.